Journey to Earthland: The Great Transition to Planetary Civlization 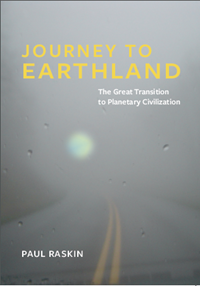 Journey to Earthland
The Great Transition to Planetary Civilization

A global scenario pioneer charts a path to an organic planetary civilization, a vision that opens before us as both possibility and exigency in an interdependent and dangerous century.

We have entered the Planetary Phase of Civilization. Strands of interdependence are weaving humanity and Earth into a single community of fate—the overarching proto-country herein christened Earthland. In the unsettled twenty-first century, the drama of social evolution will play out on a world stage with the perils many and dark premonitions all too plausible.

Still, a Great Transition to a planetary civilization of enriched lives and a healthy planet remains possible. But how? What forms of collective action and consciousness can redirect us toward such a future? Who will lead the charge? What might such a world look like?

Journey to Earthland offers answers. It clarifies the world-historical challenge; explains the critical role of a global citizens movement in advancing social transformation; and paints a picture of the kind of flourishing civilization that might lie on the other side of a Great Transition.

In this pivotal moment, the odyssey to a different world is underway yet the ultimate destination depends on choices and struggles yet to come. Acting to prevent the futures we dread is where our work must begin. But the larger task is to foster the finer Earthland we and our descendants deserve.

"Journey to Earthland is a masterpiece, beautifully written and powerfully argued."
James Gustave Speth, The Bridge at the Edge of the World

"A well-researched, rigorous, and deeply moving treatise by a theoretical physicist and seasoned visionary, and we need visionaries in these fraught times. The framework it builds for understanding and shaping our global moment offers the best hope for the future of this planet."
Stephen Kern, The Culture of Time and Space