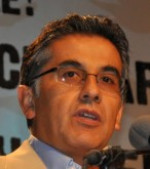 Pablo Solón, a Bolivian social and environmental activist, is the director of Fundación Solón and former executive director of Focus on the Global South. He joined the struggle against water privatization in Cochabamba (2000) and La Paz (2005), and coordinated the Bolivian movement against the Free Trade Agreement of the Americas (2001–2005). He served as the Bolivian Extraordinary Ambassador for Integration and Trade (2006–2008) and Ambassador to the United Nations (2009–2011) before parting ways with President Evo Morales following police repression of an indigenous peoples march. His father was the well-known muralist Walter Solón Romero Gonzáles.

With roots in traditional Andean cultures, Vivir Bien offers a compelling alternative development path. But without a focus on self-determination from below and cross-movement collaboration, it risks being coopted by those in power.