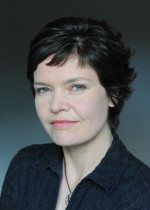 Kate Raworth is an economist focused on making economics fit for the twenty-first century. Her book Doughnut Economics: Seven Ways to Think like a 21st Century Economist is an international bestseller that has been translated into 18 languages, and was long-listed for the 2017 Financial Times & McKinsey Business Book of the Year award. She is co-founder of Doughnut Economics Action Lab, working with cities, business, communities, governments and educators to turn Doughnut Economics from a radical idea into transformative action.

She teaches at Oxford University’s Environmental Change Institute and is Professor of Practice at Amsterdam University of Applied Sciences. Kate was previously a senior researcher at Oxfam (2001–2013), a co-author of the United Nations' Human Development Report (1997–2001) and a fellow of the Overseas Development Institute, working as an economist in the Ministry of Trade, Industries and Marketing, Zanzibar (1994–1997).

Dollars to Doughnuts: The Shape of a New Economy

The author of Doughnut Economics describes what mainstream economics gets wrong and how another economics can nurture both people and planet.