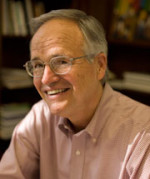 Gus Speth is an Associate Fellow at the Tellus Institute and Professor of Law at the Vermont Law School. In 2009, he completed his decade-long tenure as Dean of Yale School of Forestry and Environmental Studies. From 1993 to 1999, Gus Speth was Administrator of the United Nations Development Programme and chair of the UN Development Group. Prior to his service at the UN, he was founder and president of the World Resources Institute, Professor of Law at Georgetown University, chairman of the U.S. Council on Environmental Quality (Carter Administration), and senior attorney and co-founder of the Natural Resources Defense Council. He is the author, co-author, or editor of seven books, including the recent America the Possible: Manifesto for a New Economy (2012) and Angels by the River (2014). He currently serves on the boards of the New Economics Institute, Center for a New American Dream, Climate Reality Project, and the Institute for Sustainable Communities. He is an honorary director of the World Resources Institute and the Natural Resources Defense Council. Gus Speth holds a JD from the Yale Law School.

Gus Speth reflects on his distinguished career in environmental advocacy, public service, and higher education, discusses his new memoir Angels by the River, and reflects on the prospects for systemic change in the twenty-first century.

Searching for Radicalism in a Corporate Age

Peter Dauvergne and Genviere LeBaron’s new book Protest Inc. analyzes the headwinds driving against the rise of radical activism. Although it offers a much-needed critique of the weakening of NGO resolve to challenge the system, it provides little guidance on how to bring such change about.

Beyond the Growth Paradigm: Creating a Unified Progressive Politics

The US political economy is failing across a broad front—environmental, social, economical, and political. Deep, systemic change is needed to transition to a new economy, one where the acknowledged priority is to sustain human and natural communities. Policies are available to effect this transformation and to temper economic growth and consumerism while simultaneously improving social well-being and quality of life, but a new politics involving a coalescence of progressive communities is needed to realize these policies. Yet, on the key issue of economic growth, differing positions among American liberals and environmentalists loom, a major barrier to progressive fusion. This Perspective proposes a starting point for forging a common platform and agenda around which both liberals and environmentalists can rally.