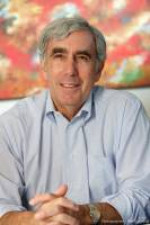 David Krieger has served as president of the Nuclear Age Peace Foundation, which he co-founded, since 1982. He has been a leader in the global movement to abolish nuclear weapons, playing a key role in establishing international networks such as Abolition 2000, the International Network of Engineers and Scientists for Global Responsibility, and the Middle Powers Initiative. He has written scores of articles and books, including ZERO: The Case for Nuclear Weapons Abolition (2013). He has a BA in Psychology from Occidental College and MA and PhD degrees in Political Science from the University of Hawaii-Manoa, as well as a JD from the Santa Barbara College of Law.

Nuclear Abolition: The Road from Armageddon to Transformation

A legacy of the Cold War, nuclear weapons will leave us perennially on the eve of destruction—until they are abolished once and for all. Nuclear abolitionists must join forces with movements seeking sustainability and justice to overcome governmental hostility and public apathy.